These are the Lagos roads that will be closed to traffic when Buhari storms commercial city for his presidential campaign.

President Muhammadu Buhari and his governing All Progressives Congress (APC) will basically shut down Lagos, Nigeria’s commercial capital, on the weekend of February 9-10, 2019.

The Lagos State chapter of the APC has promised to deliver over two million votes to candidate Buhari in the February 16 election and some 100,000 Lagosians are expected to pack full the Teslim Balogun Stadium in Surulere when the president and APC chieftains come calling.

As a result, the Lagos State government has announced that there will be traffic restrictions on major routes or a blockade of entire stretches of roads.

If you reside in Lagos, here are the areas to completely avoid on Saturday

1..Airport Road in Ikeja, to Airport toll gate, to around Ajao Estate.

14..All of Surulere. Like, if you reside in Surulere, don’t even bother leaving your apartment on Saturday.

Former Minister of State for Defence and Chairman, Transport Committee on President Muhammadu Buhari’s Campaign visit to Lagos, Demola Seriki, says it will be best to avoid Surulere altogether on the day.

Seriki added that: “For instance, Alaka (by Lanre Shittu Motors) on the service lane, inwards Stadium will be closed to traffic while vehicles will be diverted to the Stadium Bridge on the main carriage way.

“Shitta, inwards Stadium and Stadium inwards Shitta will be closed to traffic and vehicles diverted to Adeniran Ogunsanya Street or Akerele extension. Traffic from Barracks to Stadium on Funsho Williams Avenue will be diverted to Stadium Bridge on the main carriageway to Alaka.”

According to Punch, Seriki said over 100,000 APC members are expected at the Teslim Balogun Stadium, adding that Lagos is ready to deliver over two million votes to the APC presidential candidate.

The Federal Road Safety Corps (FRSC) Sector Commander for Lagos, Hyginus Omeje, says articulated trucks will be restricted from gaining entry into the metropolis from Friday, February 8, in preparation for the presidential rally on Saturday.

Articulated trucks camped on pothole laden bridges, while obstructing regular commute all across the city, have turned Lagos into a living hell for residents for two years running. 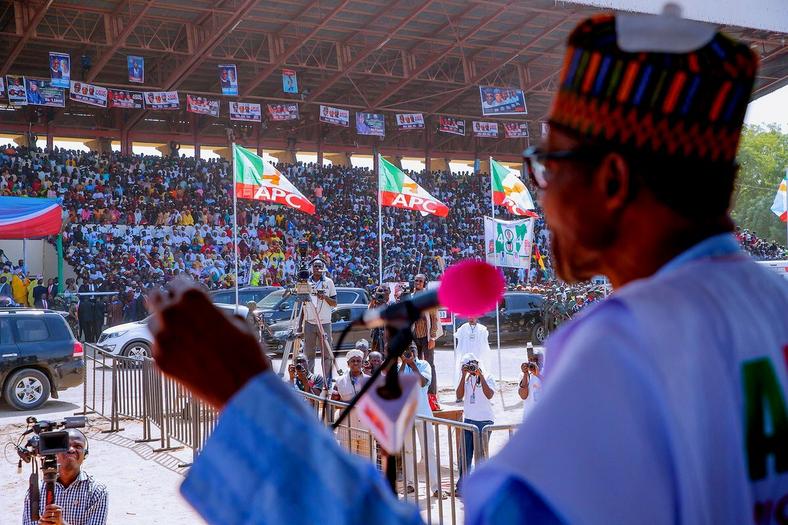 Buhari has been packing full stadiums across Nigeria (Presidency)

Now, they get to take a break from constituting themselves into a nuisance, for two days.

Omeje says; “Truck drivers are advised to plan their movements and cooperate with officers to ensure that trucks do not jeopardize the travel advisory issued for the safety and comfort of all while the event lasts.”

Buhari has been flying round Nigeria to solicit votes and drawing huge crowds while at it.

There are 72 other candidates vying for the presidency alongside Buhari.