HomeTechnologyThe 10 Most Expensive Laptops in the World in 2021

The 10 Most Expensive Laptops in the World

Summary of the World Expensive Laptops

We hope you enjoyed our list of the 10 most expensive laptops in the world.

From an outsider looking in, some of these laptops seem like a complete waste of money.

However if you can afford it, and want to separate yourself from the pack, then why not?

They’ll more than likely be worth even more money in the future anyway, and you’ll have the kudos of owning something of such prestige that most can’t!

Here’s a quick recap of the 10 most expensive laptops in the world:

Nowadays, you can pick a basic laptop for around one hundred dollars, and it’ll do the job.

However, the laptops listed below are far from basic, and are the most expensive laptops in the world.

These are for people that are looking to set themselves apart from the rest. It’s all about prestige and exclusivity!

So, here’s our list of the 10 most expensive laptops in the world… 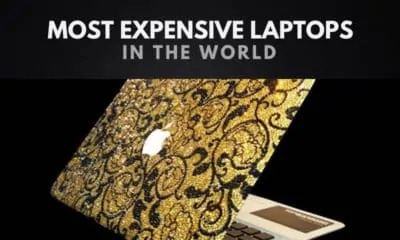 The 10 Most Expensive Laptops in the World

The list of laptops and figures mentioned below have been compiled from various sources around the web; such as Top Ten Flash, Tech Untold & Blog Nox.

These are the 10 most expensive laptops in the world: 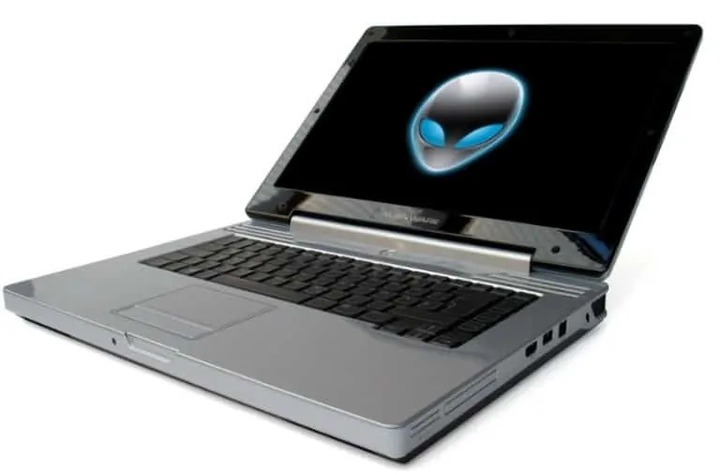 The first laptop on our list is from one of the most popular gaming laptop brands in the world, Alienware.

The Area 51 M15X is one of the best performing gaming laptops on the market and provides the user with exceptional gaming experience.

If you’re looking for a laptop that’s reliable, has great graphics and performance, and you have the budget to spend; then the Area 51 M15X is a great choice.

The laptop will cost you somewhere in the region of $5,000 depending on where you purchase it. 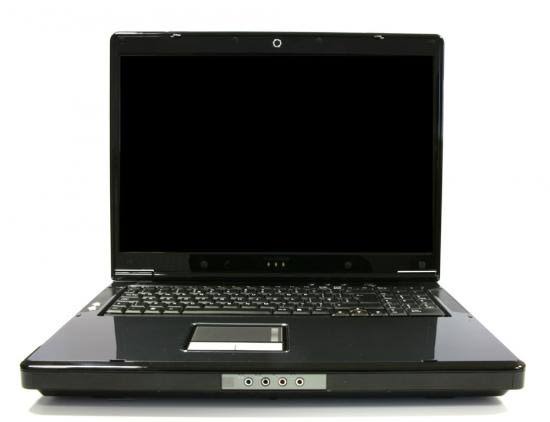 Rock Extreme SL8 is the ninth most expensive laptop in the world.

For only an extra $500 more than the previous laptop from Alienware; you can buy yourself what’s considered to be one of the most powerful gaming laptops ever.

So if you’re into gaming and you’re looking to upgrade, then the Extreme SL8 could be a good option.

You’ll also benefit from its fast processing speeds when completing other tasks or for doing multiple things at once.

If you do want to grab yourself one, you’ll need around $5,500 to seal the deal.

Next on the list is the Stealth MacBook Pro customised by ColorWare.

Normal MacBook Pros are already pretty pricey, to begin with, selling for around $1,500 for a 15-inch model.

However, once ColorWare got their hands on some, they decided to make 10 limited edition MacBook Pros with a price tag of $6,000.

For your $6,000, you’ll get a super cool Xero-gloss finish and custom made matte screen, as well as soft-touch technology; which makes using the trackpad an even better experience, whilst giving it some added protection.

Be ready to part with $6,000 if you want one of these, or maybe, even more, depending on whether you can get your hands on one or not. 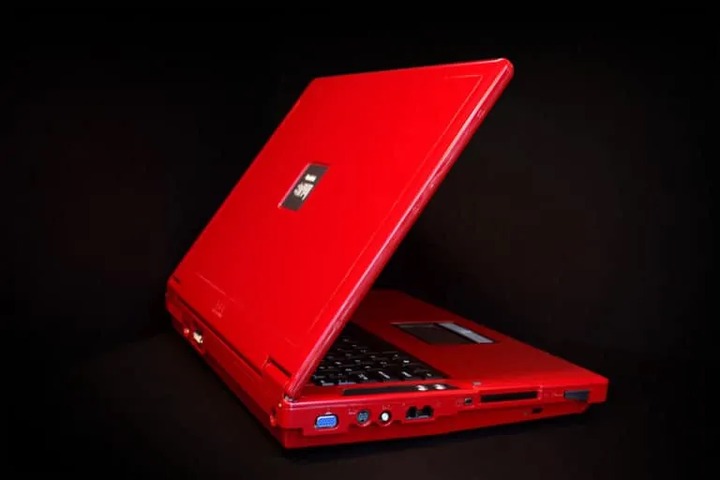 Coming in at number 7 our the list of the most expensive laptops in the world is the Voodoo Envy H171, from Hewlett Packard.

Its impressive price tag is for the top of the range, fully specked out model. You can also purchase a less specked version for around $4,500.

However, if you were to have purchased this in 2007, you’ll of also had the option to customise its appearance to suit your own style.

For example, HP offered 24 colours and 14 tattoo style designs to choose from.

So, if you’re wanting to buy yourself one, you might have to settle for someone else’s design choice, or try and seek out a colour scheme to your liking. 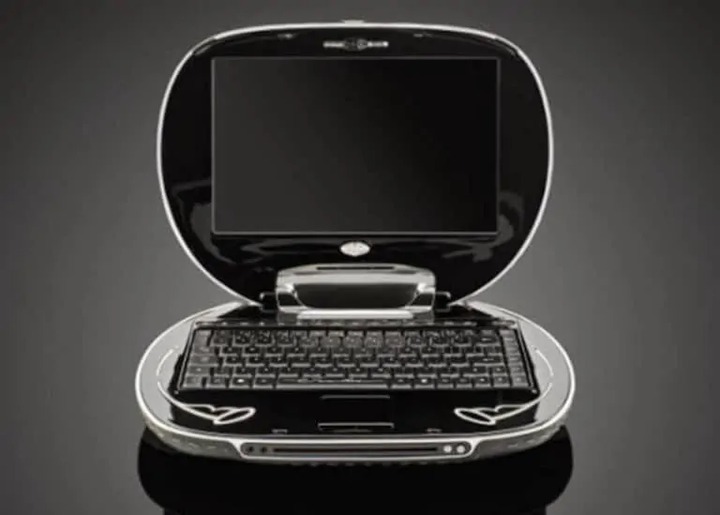 If you’re a luxury car fan, then I’m pretty sure you’re going to like this collaboration between British luxury car manufacturer, Bentley and EGO.

For your money; you can expect an authentic hand-decorated diamond-stitched leather exterior, with a built-in chrome handle, including the company’s trademark “Knurling” engraved on it. It’s also decorated with white gold and features the Bentley logo dead centre.

The collaboration was limited to only 250 pieces, which helps maintain its exclusivity and price.

As far as a computer goes, the specs are not bad: AMD TurionTM 64 Mobile Processor, 2GB of RAM, 160GB hard drive, a 12-inch wide display and Microsoft Vista Ultimate.

If you’ve got $20,000 burning a hole in your pocket, and you’re into cars and computers, then this could be the perfect laptop for you. 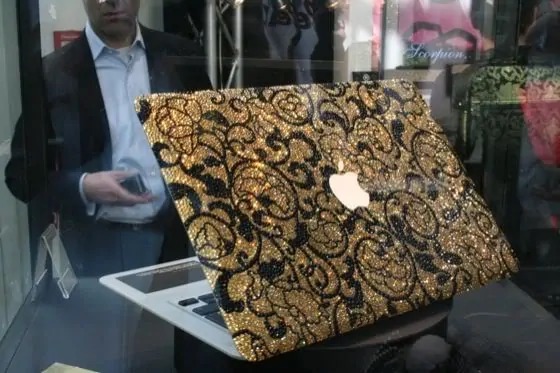 Released in 2008 at CeBIT, the worlds largest computer expo, this was one of the first-ever laptops to be coated in 24-karat gold and 12,000 Swarovski crystals.

To maintain its exclusivity, only 20 pieces were made, and upon first release, some sold for approximately $39,750 before dropping in price.

If you can manage to track one down and get a good deal, you’ll certainly turn a lot of heads if you bust it out in Starbucks! 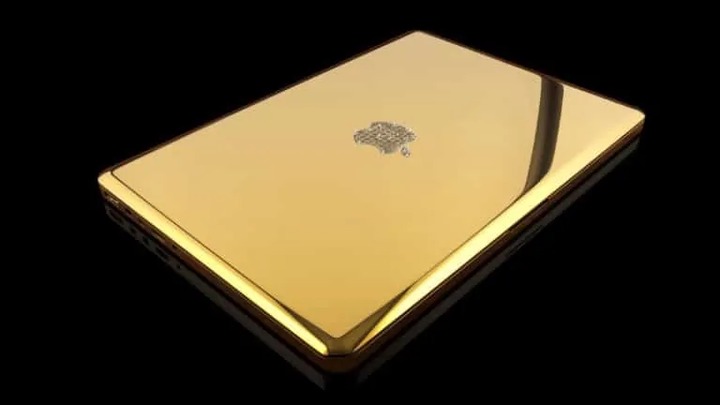 Computer Choppers created this one of kind customised MacBook Pro in 2013 for an anonymous buyer.

The entire case of the laptop is made out of 24-karat gold and the remaining non-metal parts were painted by hand to match.

Perhaps one of the nicest features was the remade Apple logo on top of the laptop. It was remade with dozens of multi-coloured sparkling diamonds.

As well as the aesthetics of the laptop, the internals are what you’d expect from a normal Macbook Pro: 2.4GHZ Internal Core 2 Duo, 4GB RAM, 160 GB hard drive and a 15-inch display.

Even after the customisations, the laptop was still presented to the buyer with full warranties.

To be honest, I’m an avid Macbook Pro user myself, so if I had a spare $30,000 to drop on a customised MacBook, then you can bet your bottom dollar I would! 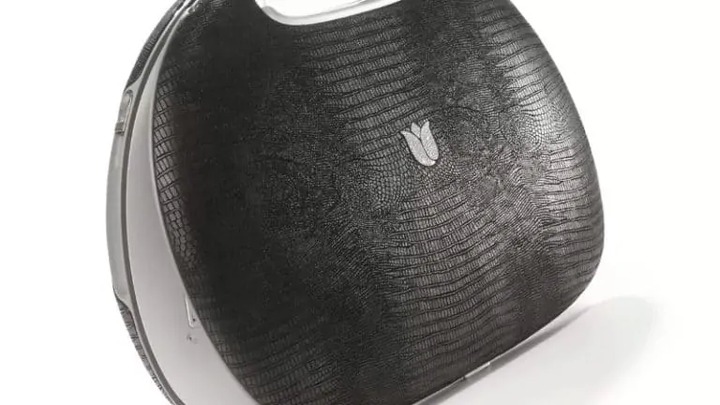 Coming in at number three on our list of the most expensive laptops in the world is the Tulip E-GO Diamond.

Costing an insane $355,000, this luxury item was made by Tulip under the E-GO Life-Style B.V brand.

As you would expect, this laptop operates and runs just like any other on our list. It includes an AMD Turion 64-Bit Processor, 1GB of RAM, a 160GB hard drive and a 12.1-inch widescreen WXGA resolution display.

However, it differs greatly from the rest due to its unique design and aesthetic appearance. It’s made to look like a woman’s handbag so it comes across as more of a fashion accessory than a laptop.

It’s made from solid palladium, white gold and encrusted with brilliant-cut diamonds.

I mean, it’s definitely unique that’s for sure, but $355,000 for a laptop seems a little excessive, don’t you think?! 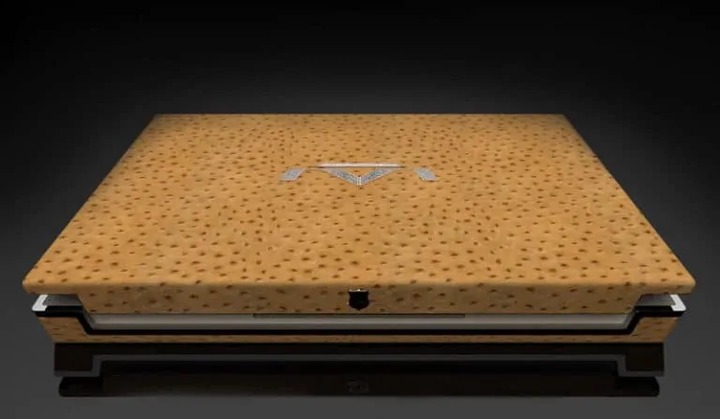 The second most expensive laptop in the world is from Luvaglio, a UK based brand/company.

You must be thinking how on earth a laptop could cost anywhere near $1 million, right?

Well, it’s pretty simple, it’s fully customisable to however you want, and includes one of the rarest diamonds in the world as the power button.

Now, let’s say you have the money to spend and want to purchase one, well, you’re going to need an invitation from the brand’s director, Robert Sinclair to do that!

However, if you do manage to secure yourself one, then you’ll be the proud owner of one of the worlds first handcrafted million dollar laptops. 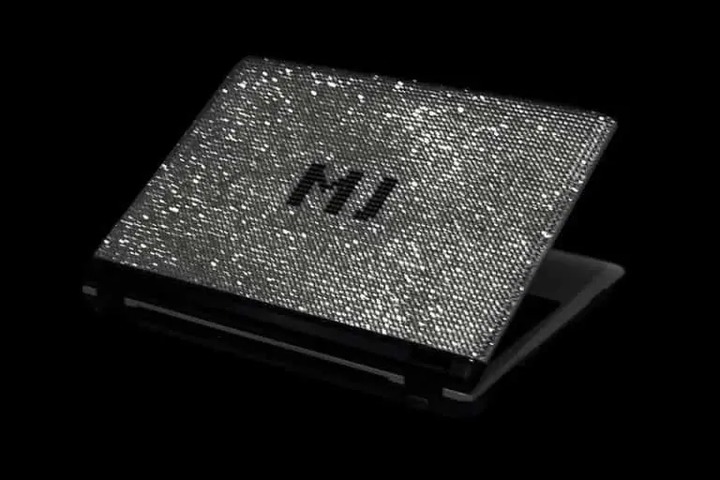 The most expensive laptop in the world goes to MJ’s Swarovski & Diamond Studded Notebook.

Ukrainian art studio MJ, created the worlds most expensive laptop in 2016 as the next instalment in their luxurious technical accessories range.

Getting straight to the point, the mind-boggling price can be attributed to the hundreds of white and black diamonds studded all over the laptop and mouse.

The laptop, itself is pretty standard and the internals is nothing to rave home about.

It was made as an exclusive limited-edition collection and it’s unknown exactly how many laptops were made.

The company also made a range of other luxurious laptops; like the Asus Lamborghini Platinum crocodile, Acer Ferrari Gold Python and the ASUS Eepc VIP Swarovski.

This is the most expensive laptop in the world that’s ever been created!

What’s your favourite most expensive laptop? Leave a comment below.

CLICK HERE: Let Robot help you buy Cryptocurrency at low price and sell at higher price for you (ONLY PROFIT)